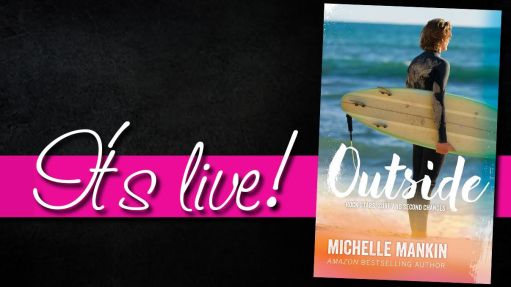 Meet Lincoln Savage in this perfect summer read. Are you ready for rock stars, surf and second chances in Outside by Michelle Mankin?

NOW AVAILABLE at the following retailers:

When handsome California surf god Lincoln Savage suddenly rolls into Ocean Beach like a rogue wave, shy beauty Simone Bianchi’s foundation is shaken. No longer under the thumb of her domineering father, she’s made a simple quiet life for herself and her fluffy fourteen pound Havanese pup running a surf shop in her hometown of OB. Long ago she gave up her dreams for a future with Linc.

But now the notorious lead singer of the Dirt Dogs has returned, and Simone is reluctant to admit that she’s still vulnerable to his killer dimpled smile and easy charm. She finds that although she’s stowed away the mementos, it hasn’t been as easy to erase the memories of their epic summer love.

It seems he hasn’t forgotten, either.

Is the recording contract he’s offering merely a pretense?

Or does he have something more in mind?

Does he really believe that they can just pick up where they left off, despite all the bad luck and heartache?

And is she willing to risk everything again for one last chance at love?

“Dammit, Mona.” I leaned in closer inhaling her sweet scent and nearly brought to my knees with desire. I wanted to have her. Right here. Right now. I had to curl my fingers into fists to keep from reaching out, grabbing her and reminding her how it used to be between us. Her lids lowered and her breathing turned ragged. Was she remembering, too, or trying to forget?

“Go away, Linc.” Apparently the latter.

“Maybe I can’t,” I admitted my voice raspy with stripped down need. “Maybe I don’t want to.”

“Don’t.” She closed her eyes and her chin dropped. “Don’t do this to me.” She wet her lips. They visibly trembled. Even though I knew I had upset her I still wanted to kiss them. “I’m not one of your groupies easily flattered by your bullshit. The fact that you’re a big rock star doesn’t impress me. I know who you really are Lincoln Savage. I’ve seen you at your best and I’ve survived you at your worst. So don’t think you can come here and play games with me.”

The bestselling author of the Black Cat Records series of novels.

Love Evolution, Love Revolution, and Love Resolution are a BRUTAL STRENGTH centered trilogy, combining the plot underpinnings of Shakespeare with the drama, excitement, and indisputable sexiness of the rock ‘n roll industry.

Things take a bit of an edgier, once upon a time turn with the TEMPEST series. These pierced, tatted, and troubled Seattle rockers are young and on the cusp of making it big, but with serious obstacles to overcome that may prevent them from ever getting there.

Rock stars, myths, and legends collide with paranormal romance in a totally mesmerizing way in the MAGIC series.

When Michelle is not prowling the streets of her Texas town listening to her rock music much too loud, she is putting her daydreams down on paper or traveling the world with her family and friends, sometimes for real, and sometimes just for pretend as she takes the children to school and back.

Gnarly Surf Themed Prize Pack including:
A  Fiery Orange Striped Roxy Beach Towel
A  signed paperback of Outside, an OB surf sticker,
Need It Now Roxy Palm tree printed Linen Beach Tote
in seafoam green to carry all of it.
(Value of $125)