A man on a mission to obliterate his existence.

A woman bent on eternal punishment.

Once in love, separated by Fate.

Can Caius and Wren forget the pain of the past and forge a new future for themselves?

*For mature readers only due to graphic language and sexual situations*

Buy It On Amazon

“I don’t need help,” Caius groaned, clutching at his ribs and trying not to breathe too deeply.

Impatiently, Caius tried to push away her offer of assistance, but realized that she was toostubborn to take no for an answer, and much to his surprise, found that he kind of liked her fussing over him, gruff as she was about it. With a resigned groan, he allowed her to lead him out of the bar and into a dimly lit hallway. With an ease that surprised him, she had him wrangled and maneuvered down the hall and into her sparsely furnished office in a shorter time than her painfully thin frame would have suggested. Moving carefully and breathing shallowly due to his battered ribs, Caius allowed this tough and wiry woman to remove his shirt to better examine his injuries.

Teagan ran her fingers over Caius’ ribs, wincing inwardly at the bruising already mottling his smooth skin and steeling herself against his hissed exclamations of pain. Moving behind him to search for other injuries, Teagan fought the urge to wrap her arms around him and lean against his back as her eyes roamed the muscled expanse appreciatively. It was then that she saw the tattoo; it was a work of beautiful lines, curves and scroll work that drew the eye. But it wasn’t the artwork that caught her attention. No. It was the one name that she realized was written amid those lines and curlicues of color that stole her breath:

He’d had her name- the name she kept carefully hidden from the rest of the world- indelibly inked into his skin. He’d made her name a permanent part of his body, and she wasn’t sure what it meant. “Interesting ink,” she commented, in as bored a voice as she could manage.

She heard him grunt and looked up in time to see him glance over his shoulder at her.
“Thanks,” he replied with little interest, “It helps to remind me.”

“Of an old girlfriend?” Teagan asked, pretending she didn’t know, nor that she really cared.

“Yeah,” he scoffed in reply, “And where she stuck the knife when she stabbed me in the back.” He sounded bitter and angry, and floundering, Teagan cleared her throat and moved back in front of him.

“I’ll bind your ribs for you,” she muttered, taking a step back and giving him a beady look to cover how flustered and guilty his words made her feel, “And then I want you gone. Don’t ever come back, either.”

Caius didn’t have an answer for her, and barely managed to raise his arms high enough to allow her the room she needed to begin wrapping an elastic bandage tightly around his chest. He watched her, staring at the top of her closely cropped hair, getting glimpses of the curve of her cheek and the thin lines of her neck and shoulders and catching the occasional teasing whiff of her natural perfume. The tightness of the bindings she wrapped around him made breathing less labored and lessened some of the pain he felt, making it easier for his brain to dwell on something other than pulling one breath at a time into his body, and as he continued to watch her, something about the way she moved, about that curve of her cheek and the way her dark lashes fanned over her pale cheeks tickled an elusive memory awake. He waited until just the moment she secured the end of the wrapping and was preparing to take a step back to reach out with one hand and cup her face.

The moment he touched her, she seemed to stop breathing and go absolutely still. Slowly, hesitantly, she dragged her eyes up to his until he was staring into fathomless pools of dark melted chocolate and he was struck by the naked fear he saw in them. Without thinking, he raised his other hand and soon cradled her face between his broad palms, his eyes searching her features, trying to understand why it was that this rail thin and tough as nails woman seemed so familiar. There was nothing about her that hinted at any kind of softness within her, nothing that spoke to him of womanly needs and desires and he watched as she began to bite her bottom lip nervously, drawing his complete attention to it, and he realized that he had to change his assessment of this woman. Her mouth was full and lush and of such a lovely shade of pink, that Caius’ vague memories were suddenly awakened and sharpened with a roar. Only one woman in his life had ever had such sweetly tempting lips of that particular shade of pink. Unable to control himself, he breathed a single word:

He saw her eyes widen in shocked acknowledgement and that was all the confirmation he needed. With a growl, he crushed his mouth against hers and let a sweet feeling of homecoming sweep over him, because despite his vow to seek painful retribution for all the pain she’d caused, now that he had the chance to do so, all he could think to do was kiss her. 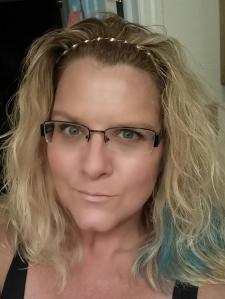 Brenda Tetreault grew up on the southern Oregon coast.

All through school, she wrote but put it aside when a school counselor informed her that, while she had a nice little hobby, she would never be good enough at it to pay the bills. After a short stint in the Air Force, during which she met and married her husband, Brenda settled down to be a military wife and the mother of a precocious little boy. She began writing again in her mid-thirties and in 2009 her first book, The Witcher Legacy: Book One of The Bounty Cove Chronicles was finally published.

In 2012 Brenda completed her first paranormal romance series, The Bounty Cove Chronicles, and is currently working on an entirely new series. On September 23, 2013, ‘Tempted’, the first book in The Nightshade Series was released through Kindle Direct Publishing, and was followed up with the second book in the series, ‘Salvaged’, on May 16, 2014. ‘Beloved’, the third in the series, followed soon after on October 28, 2014.

Today, Brenda is enjoying a small amount of success, and has even begun to pay some of the bills with her writing!  While she is unsure how many adventures there will be in this new series, Brenda does promise that it will feature all of the fun, adventure, love, steamy sex, and happily ever afters that have been the hallmarks of her writing from the beginning!