I was told that dreams were our heart’s desires. My nightmares, however, became
my obsession.

His name is Michael Crist.

My boyfriend’s older brother is like that scary movie that you peek through
your hand to watch. He’s handsome, strong, and completely terrifying. The star
of his college’s basketball team and now gone pro, he’s more concerned with the
dirt on his shoe than me.

But I noticed him.

I saw him. I heard him. The things that he did, and the deeds that he hid…For
years, I bit my nails, unable to look away.

Now, I’ve graduated high school and moved on to college, but I haven’t stopped
watching Michael. He’s bad, and the dirt I’ve seen isn’t content to stay in my
head anymore.

Because he‘s finally noticed me.

Her name is Erika Fane, but everyone calls her Rika.

My brother’s girlfriend grew up hanging around my house and is always at our
dinner table. She looks down when I enter a room and stills when I am close. I
can always feel the fear rolling off of her, and while I haven’t had her body,
I know that I have her mind. That’s all I really want anyway.

Until my brother leaves for the military, and I find Rika alone at college.

The opportunity is too good to be true, as well as the timing. Because you see,
three years ago she put a few of my high school friends in prison, and now
they’re out.

We’ve waited. We’ve been patient. And now every last one of her nightmares will
come true.

*Corrupt is a STANDALONE dark romance with no cliffhanger. It is suitable for
ages 18+.

A secret pool hid behind the falls, and the water glowed with neon blue light, much like the light in Michael’s penthouse. Off to the right lay a bank, of sorts,where you could lie down, sit, or people who weren’t swimming could walk in, stand, and see the beauty inside without getting wet.
The whole place was exactly like a cave. The rock walls and ceiling glittered with little white lights, probably to look like stars, and I couldn’t help the little groan that escaped as I tensed my thighs. I was turned on.
I wasn’t sure if it was just the place, the drinks, or Michael. My senses had
been overwhelmed today.
I waded further in, enjoying the solace and the darkness, but then I saw Damon enter the cave and I stopped.
He’d walked straight through the falls, coming from the other side and w
as drenched. He pushed his wet, black hair over the top of his head, the wall of his chest, shoulders, and arms glistening with water. He must’ve either brought swim shorts with him or borrowed some, but I immediately took a step back, seeing that he was coming straight for me.
“I wish I could say I wasn’t used to that reaction from women,” he mused, noticing my retreat.
My hands fisted, and I licked my dry lips. “No, you don’t,” I contended. “I think you like it.”
His lips curled, and I fought not to back away again. He wanted me to be scared. He counted on it.
“I’m not scared of you.” I cocked my head, my heart racing despite my steel resolve.
The music blared outside, and between that and the waterfall, I doubt anyone would hear me if I screamed.
He stopped just in front of me, an inch between us. “Yeah, you are.”
And then he wrapped his arms around my waist like a steel band and
lifted me off the ground.
I grunted, planting my hands on his shoulders and pushing away. “Damon.”
“I could tear you limb from limb,” he threatened, his breath falling across my face. “And I wouldn’t even break a sweat”
I pressed my hands into him, pushing harder and twisting my body left and then right. “Knock it off. Let me go.”
“You know what I thought about in prison?” He took hold of my hair at the
back of my scalp, and I gasped as he pulled my neck back, holding
me tight and still with his lips only an inch from mine.“ You…and our last night together,” he finished.
He kissed me, soft but possessive, dragging my bottom lip out with
his teeth. I jerked away, digging my nails into his upper arms as my heart hammered in my chest.
“Damon, fuck off,” I bit out
But he tightened his fist in my hair, brushing my lips with his.“Every time I
was alone, I stroked my cock, seeing you in my head and taking it like a good girl.”
I darted out my hand and took his neck in my fingers, squeezing as hard
as I could and trying to push him away from my mouth.
He laughed as if he didn’t notice.“You never told Michael what happened that night, did you?”
“How do you know I haven’t?” I growled, baring my teeth.
He pushed his head in closer. “Because he would’ve killed me already.” I clenched my fingers around his neck, digging in my nails.“Then maybe I will tell him,” I threatened. 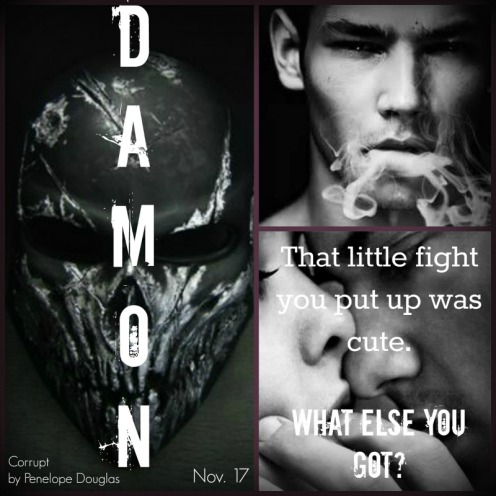 Penelope Douglas is the New York Times, USA Today, and Wall Street Journal bestselling author of the Fall Away series.

She dresses for autumn year round, loves anything lemon flavored, and believes there is too much blood in her Coca Cola stream. Or too much Coca Cola in her blood stream. Or…
You know what? It doesn’t matter. She loves Coke. Now you know.
She lives in Las Vegas with her husband and daughter.
Author Links
Website
Facebook
Twitter
Pinterest
Instagram
Goodreads