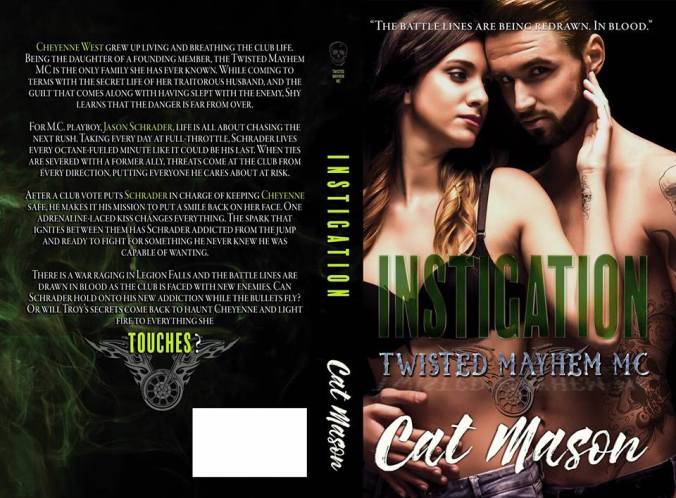 Cheyenne West grew up living and breathing the club life. Being the daughter of a founding member, the Twisted Mayhem MC is the only family she has ever known. While coming to terms with the secret life of her traitorous husband, and the guilt that comes along with having slept with the enemy, Shy learns that the danger is far from over.

For M.C. playboy, Jason Schrader, life is all about chasing the next rush. Taking every day at full-throttle, Schrader lives every octane-fueled minute like it could be his last. When ties are severed with a former ally, threats come at the club from every direction, putting everyone he cares about at risk.

After a club vote puts Schrader in charge of keeping Cheyenne safe, he makes it his mission to put a smile back on her face. One adrenaline-laced kiss changes everything. The spark that ignites between them has Schrader addicted from the jump and ready to fight for something he never knew he was capable of wanting.

There is a war raging in Legion Falls and the battle lines are drawn in blood as the club is faced with new enemies. Can Schrader hold onto his new addiction while the bullets fly? Or will Troy’s secrets come back to haunt Cheyenne and light fire to everything she touches?

Amazon
All Other Buy Links 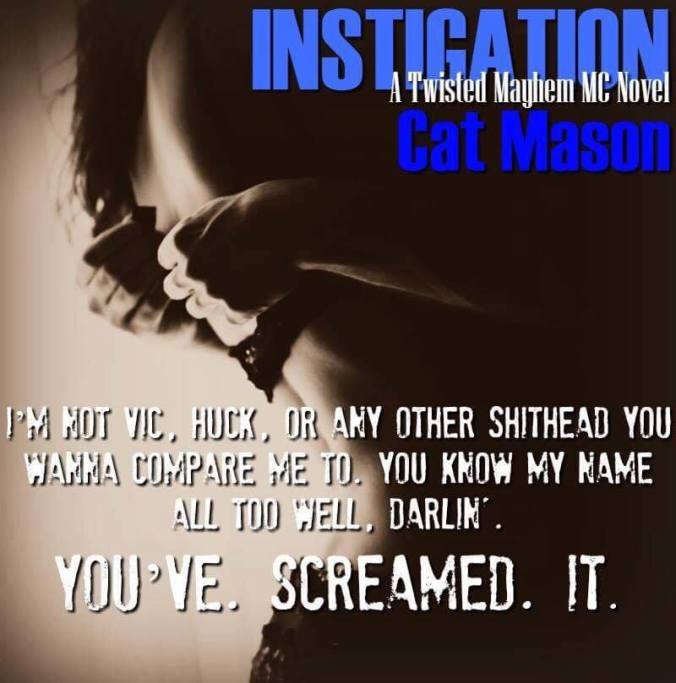 Cheyenne grew up in the Twisted Mayhem MC. Now she’s dealing with the guilt of her husband’s betrayal to not only her but everyone in the club. Jason Schrader is the fun loving bad boy who can put a bullet into a rival while cracking jokes with a smile. Shy and Schrader have been friends since she was 14 but when he’s asked to protect her when D.A.’s enemies want revenge, things start to change. Will Shy be the woman who finally settles Schrader down?

“My heart flutters in my chest every single part of me wanting to believe him, to put faith in him because I know he would be there for me. I need the supportive shoulder that he has always given when I needed it, without question. I want more than anything to lay out everything rattling around inside my heard, so that he can tell me it is going to be okay, even if he couldn’t possibly guarantee me that. The words I need to say are on the tip of my tongue. Except, once again, they are lodged in my chest, weighted down by the fear that he will never see me the same way once he knows what I am hiding.”

She did it a-freaking-gain! From page one…and oh how amazing page one was…to the very last page I’m on edge and just inhaling every single word. This book is a steamy, sassy, nail-biting adventure. I’m so invested in every single character that even when they quarrel amongst themselves I’m like…stop! Y’all love each other…don’t make me traumatized! I’ve loved Shy from her first feisty comment in Retaliation and Schrader…he can charm the panties off any lady. Shy didn’t stand a chance. Schrader has a sense of humor under even the most stressful situations. He is probably my favorite member of the Twisted Mayhem MC. I hate to pick just one. Don’t worry Stone, Colt, Jinks and Doc. I still love you!

I was so scared once the secrets came out that poor Shy would be held accountable. That’s why I couldn’t stop reading! I had to know all my people were going to be okay. And the ending! How??? What??? Why??? **Screams and sobs in my pillow** 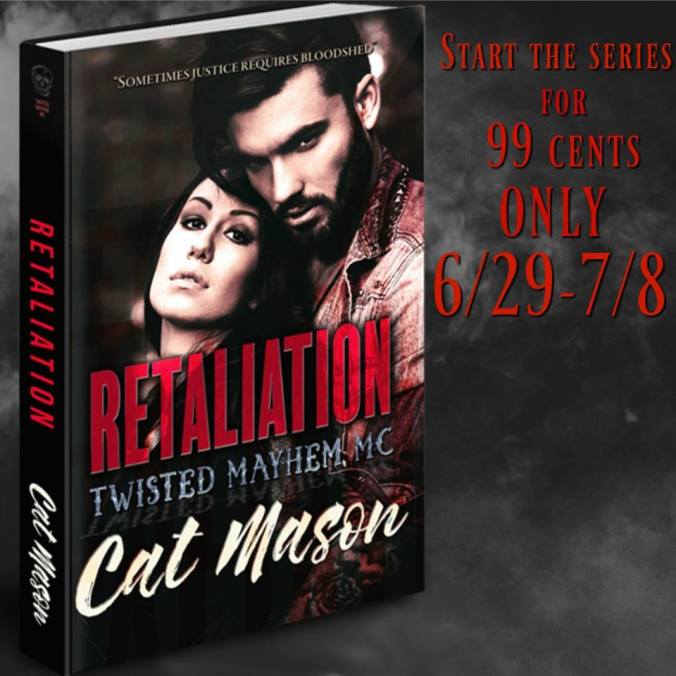 When Roanne Frazier is thrown into a dangerous world she knows nothing about, the only one she can count on is the only person who has ever let her down.
Blood and bullets are part of the game for Jensen Stone. Being President of the Twisted Mayhem MC means sometimes business requires bloodshed and Stone has no problem getting his hands dirty. Known for being fearless and ruthless in his tactics, his main goal is doing all he can to better his club and his town. Though it is easy to be reckless when you have nothing to lose.

The world as they know it is about to be turned upside down. The pain of their pasts collide with the chaos of the present and sends the tension building between them into overdrive, proving that some things don’t fizzle out with time. Secrets are revealed, lives are changed, and the small town of Legion Falls, Tennessee will never be the same.
Will Ro and Stone find a way to hold onto each other while everything comes crashing down around them? Or will they be torn apart for good by their need for retaliation?

Warning: This book contains adult subject matter and steamy sexual content. This book is meant as a work of fiction and meant to entertain, not to depict any real life motorcycle club or real life events. 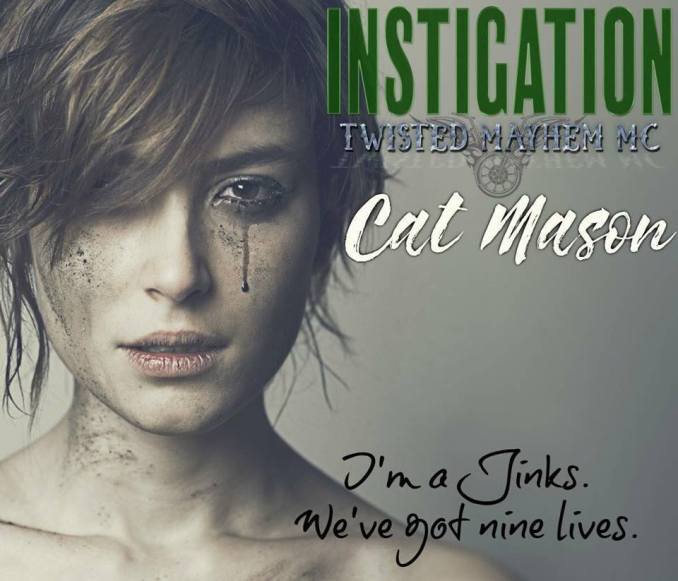 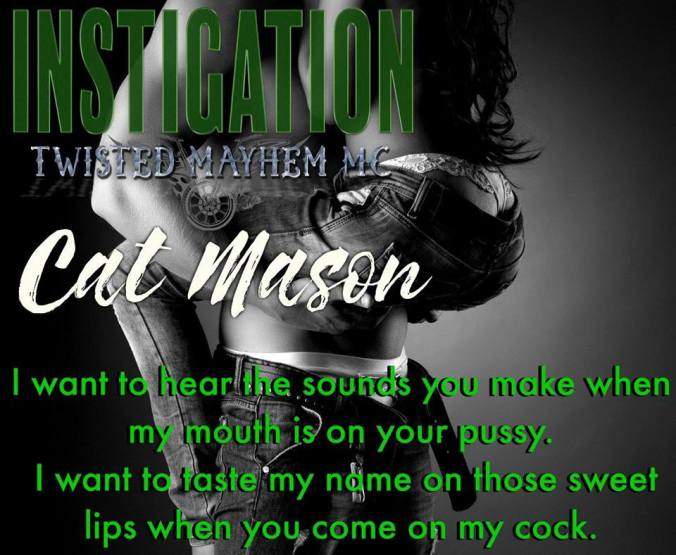 Cat Mason is a thirty year old, married mother of three. When she isn’t writing; she is spending time with her kiddos or reading. She was born and raised outside of St. Louis, Missouri, just over the Mississippi River in Granite City, Illinois. Cat writes romance of all kinds with twists of humor.

Connect with the Author