Score one for the Carolina Cold Fury hockey team as a stone-cold badass melts for a woman who makes his blood run hot.

As one of the league’s toughest enforcers, Van Turner is ruthless on the ice. He plays hard because it’s the only way to channel the rage boiling inside, and a reputation as an A-hole is better than everyone knowing the truth. Van has spent his entire life running from a secret that’s kept him from getting involved in relationships—or accepting lucrative deals with East Coast teams. Then the Carolina Cold Fury makes him an offer he can’t refuse . . . and Van meets a woman he can’t resist.

Simone Fournier is the stubborn one in her family—and that’s saying something, considering her brothers are two of the Cold Fury’s biggest stars. Simone gets what she wants, and what she wants is Van. Still, there’s a part of him Simone can’t reach, no matter how hard she tries. In private, he’s all fire and passion. In public, he freezes her out. Van may want to push her away, but Simone won’t let him go that easily. Because this time, she’s playing for keeps. 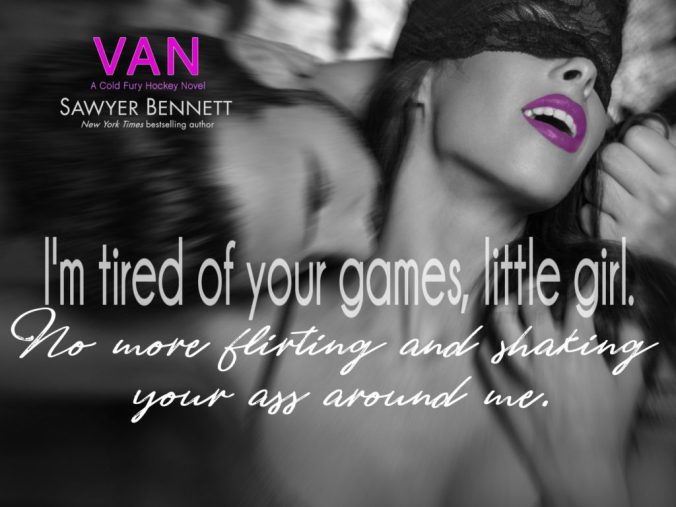 I absolutely adore this series!! Each one captures me from the very first page and I’m in my own little world until the very last page….which was what I thought I was getting in this book but I didn’t. Now, don’t get me wrong, I loved the plot…it just felt like something was missing…I struggled with the relationship with the two main characters…too much hot and cold and just felt off to me.

Simone….oh I just loved her!! She has dropped out of college and has decided to show up on one of her professional hockey player brothers doorstep to stay for a little while…only he does not live alone, he lives with a fellow teammate Van.

She is just a spitfire…so full of life and has a one liner for everything! Van however, is one of the most closed off humans on the face of the earth, has never been in a relationship and is socially stunted. He has trouble connecting with people and struggles with even having more then a few worded conversation. BUT……his past is a doozie and I totally get why feels the way he does and it’s sad to see…I don’t want to delve into his past too much because its vital to the story but it slowly comes out and explains why he is the way he is.

Simone is immediately attracted to Van and is like a dog with a bone and won’t let go until she gets him into her bed!! Which sets the scene for a few comical scenes…even though Van wants nothing to do with this tiny ball of fire..especially because she is a teammate’s sister. Well, she goes balls to wall in getting what she wants. A large portion of the book is the cat and mouse game and I honestly figured Van was a no go….but here is where it kind of lost me….he makes a rapid 180. Something from his past comes into his life and he is thrown for a loop. At this point, I just felt their relationship went from 0 to 60 and it was like I was reading about a totally different guy. Me no likey! Will his past effect his relationship with Simone for the good or bad? I was happy with the ending but to me, not one of my favorites in this series.

Since the release of her debut contemporary romance novel, Off Sides, in January 2013, Sawyer Bennett has released multiple books, many of which have appeared on the New York Times, USA Today and Wall Street Journal bestseller lists.

Sawyer likes her Bloody Marys strong, her martinis dirty, and her heroes a combination of the two. When not bringing fictional romance to life, Sawyer is a chauffeur, stylist, chef, maid, and personal assistant to a very active daughter, as well as full-time servant to her adorably naughty dogs. She believes in the good of others, and that a bad day can be cured with a great work-out, cake, or even better, both.