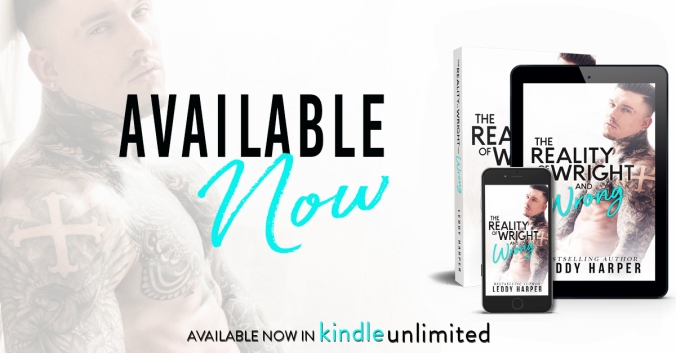 We’re celebrating the release of The Reality of Wright and Wrong by Leddy Harper! Check out the excerpt below and one-click today!

What do you do when you catch your fiancé grinding on another woman? Well, if you’re me, you run off with a sexy, ink-covered tattoo artist who goes by the name Wrong.

Then you marry him after a week.

This isn’t a story of love at first sight—love didn’t come into play until after I had ruined it all. It’s the reality of what is right and what is wrong when it comes to soulmates.

Mercy rested the back of her head along the edge of the pool, the water hiding the parts of her I craved to see. The subtle curve of her hips and smooth skin along her inner thighs. Granted, the best parts were still covered by a yellow bikini that left more to the imagination that I would’ve wanted. Regardless, the soft swell of her breasts that bobbed to the surface every now and then left me drooling and dangerously close to pitching a tent in my board shorts.

“What’s the story behind your name? Where’d Mercy come from?” I crouched in front of her so that the water covered my shoulders, putting us face to face.

She rolled her eyes, yet the smile that danced on her lips negated any irritation she sought to convey. “If you had to guess…what would it be?”

I stared at her for a moment and contemplated all the reasons her parents would’ve given her such a name. “Your mom begged for mercy while she was in labor with you.”

“You’re such a good guesser,” she said, humor coloring her tone.

“Is that really the reason? Or are you just fucking with me?”

“You’ll never know, will you, Brogan?” Not only did Mercy lookinnocent, but she acted and flirted like a good girl you’d bring home to meet your mom. And for someone like me, that was a dangerous trait to have. “Or should I call you Wrong?”

My chest constricted so rapidly, so harshly that I lost the ability to breathe for a moment. The mere the thought of her referring to me aswrongin any fashion—regardless of it being my nickname and everyone else under the sun calling me that—resembled a sledgehammer to my sternum. “No. Call me by my name.”

Any sign of amusement in her expression fell away. Apprehension curled her shoulders and embarrassment lowered her lashes, preventing me from seeing her eyes. I hated that she’d blocked me out. More than any other time since meeting her, this was the moment I needed to see them the most.

“Mercy…” It was raspy and low, my throat unwilling to release her name for fear it’d slip away and I’d never get it back. But before I could say anything else, she lifted her gaze. And I stopped breathing for an entirely new reason.

Two burning embers stared back at me, desperate and hungry for just one breeze to bring them back to life. Needing to ground myself, I grabbed ahold of her legs, behind her knees, and stepped between them. With her thighs against my hips, she gasped, and her eyes popped open wider. And those two dangerous, smoldering embers became two raging fires, yearning to burn out of control.

“Women call me Wrong because they climb into my bed thinking I’m Mr. Right, and then leave knowing I’m nothing but wrong for them. That’s why I want you to call me by my name. Call me Brogan. Not Wrong.”

YASSSSSSS! The book matched the cover in greatness! I loved this book hard. Great characters and storyline. Let me just say that Brogan could be my “Wrong” any day! He’s a super intense man. He knows what he wants and when he wants it. Not afraid to go after it. Love that about him. Mercy, however, almost made me mad a couple times. I legit wanted to shake her and be like look woman…get it together. The angst of their relationship had me all in my feels. I loved it. Amazing read. Extremely well written and great flow. Definitely one I won’t be forgetting anytime soon. 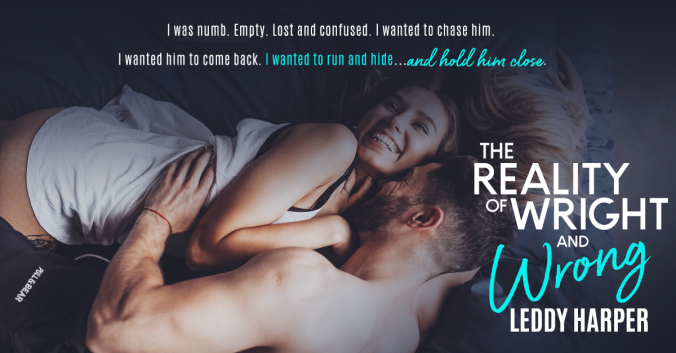 Leddy Harper had to use her imagination often as a child. She grew up the only girl in a house full of boys. At the age of fourteen, she decided to use that imagination and wrote her first book, and never stopped. She often calls writing her therapy, using it as a way to deal with issues through the eyes of her characters.

She is now a mother of three girls, leaving her husband as the only man in a house full of females. The decision to publish her first book was made as a way of showing her children to go after whatever it is they want to. Love what you do and do it well. And to teach them what it means to overcome their fears.