One extraordinary night. Two lives moving in opposite directions. A burning flame neither will forget.

Since her mom’s mysterious disappearance eleven years ago, Rayna has suffered from paralyzing fear, making her a prisoner in her own home. But when her best friend scores tickets to the hottest New Year’s Eve party in Los Angeles, Rayna is determined to overcome her phobia and go.

Cain isn’t looking for a serious relationship. He has too many secrets and is too much of a wanderer to settle down, so he’s not interested in anything more than a casual hookup. Then he meets Rayna. He can’t deny the electrifying way she piques his interest, but is their connection enough to tame his nomadic heart? Or will one unforgettable night be all they share?

The last thing Rayna expects when her path crosses Cain’s is for the sexy stranger to quiet her anxiety, steal her sense of reason, and compel her to take the biggest risk of her life and spend the night with him. Crazy? Yes. Reckless? Absolutely. But she’s never felt more alive and refuses to let the night end without seeing how far her newfound courage will take her, even if it means breaking all the rules.

Lightning Strikes is the free introductory novella to an epic series that will leave you on the edge of your seat guessing what happens next. 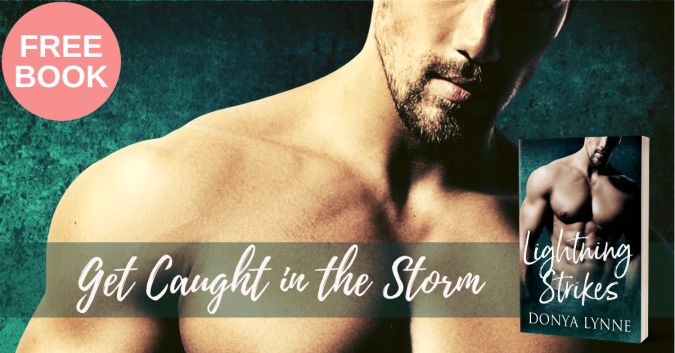 I was shocked when I finished this book in under 45 minutes because I did not realize it was a novella. Not that it mattered much because the storyline was not what I expected either. Rayna, the main character is fighting the fear of being in public ever since her mom disappeared. There is not much of a back story to this event and not sure how it will tie in later. Her best friend holds her hand basically while they attend a New Years Eve party. Clearly Rayna is terrified, scared, a wallflower and petrified BUT she meets a handsome stranger at this party and the next 60% of the book is about their “magical” night together.

How a total stranger can make her feel uninhibited and totally wipe out her paralyzing and terrifying phobia is a mystery to me. The storyline was a little unbelievable and had huge gaps of information. The likelihood of a little “d” knocking out a phobia Rayna has had for years didn’t sit well with me. This book was not for me but perhaps you will find the premise more appealing and fall in love.

“I see nothing wrong with indulging in simple pleasures from time to time. I like simple pleasures. I think they’re what life is all about. And I take pleasure where I can find it. That includes sex.”

Rayna’s face flushed a deeper shade of red as Amy inhaled a sharp but shallow breath.

He didn’t believe in tiptoeing around the subject. It was clearly on Amy’s mind, or she wouldn’t have interrogated him so hard, trying to get at his intentions. And what better way to defuse someone’s anxiety about something than to hit it head-on.

“I’m a single man,” he continued with a no-nonsense shrug. “Of course I like sex. I think about it like everyone else does. I’ll even admit that I’ve already thought about it with you.” Rayna gasped, but instead of fear, he saw excited anticipation flash through her eyes. Given how the last five minutes had gone, her reaction was a little surprising. “But that doesn’t mean I’m going to act on it,” he quickly added, noting the flicker of disappointment that crossed her face. “That doesn’t mean I can’t honor the word no. I can control myself. I won’t take something not willingly given. That’s what little boys do. And I’m not a little boy. I’m a man, and men treat women better than that. I treat women better than that.”

Rayna shyly tucked her chin as she exchanged expectant glances with Amy, almost as if seeking her approval but not quite. More like she was hinting to her friend to back off, because whether Amy liked him or not, Rayna planned on keeping him.

And that stroked Cain’s ego more than he wanted to admit.

“I’ve been around the world twice,” he said, pulling their eyes back to him so he could spill the rest of his pertinents. “My favorite city is Milan in the winter when there’s a light snow falling. My favorite color is blue. My favorite food is anything made by Storm’s full-blooded Italian mother. And, trust me, you’ve never tasted better bolognese anywhere in the world.” He took a moment to let his eyes dance over Rayna’s button nose, rosy cheeks, and full lips, which were parted as if she were a little breathless. Then he brought his gaze back to her large doelike eyes, which sparkled against the white twinkle lights strung around the bar.

She really was a stunning woman. The more he looked at her, the more beautiful she became.

He inched closer, pleased when she didn’t back away. Lowering his voice and speaking more slowly—so she clearly understood that the words he spoke next were for her, and her alone—he said, “And I crossed the room to meet you, not because you’re the most beautiful woman here—which you are—but because you are the only woman at this party who looks like she has something to say that I actually want to hear.”

Donya Lynne is the bestselling author of the award winning All the King’s Men and Strong Karma Series and a member of Romance Writers of America. Making her home in a wooded suburb of Indianapolis with her husband, Donya has lived in Indiana most of her life and knew at a young age she was destined to be a writer. She started writing poetry in grade school and won her first short story contest in fourth grade. In junior high, she began writing romantic stories for her friends, and by her sophomore year, she’d been dubbed Most Likely to Become a Romance Novelist. In 2012, she fulfilled her dream by publishing her first three novels. Her work has earned her two IPPYs, five eLit Awards, a USA Today Recommended Read, and numerous accolades, including two Smashwords bestsellers. When she’s not writing, she can be found cheering on the Indianapolis Colts or doing her cats’ bidding.