Walking away from Sam Rutherford was the hardest thing I’ve ever done.

It’s been five years since that day, and I’ve given up on looking for love. My focus is on my career. And it’s paid off—I’m successfully managing the reelection for the mayor of New York City.

Then Sam walks into my office as the new legal counsel. Which means I have to see him every single day from now until November. We vow to remain professional, but it’s a small office. The sly glances and his blistering charm are unavoidable.

It all feels so familiar. Too comfortable. After what happened the first time…I should know better.

If I’m not careful, he’ll break my heart all over again.

And I don’t know if I can survive Sam a second time. 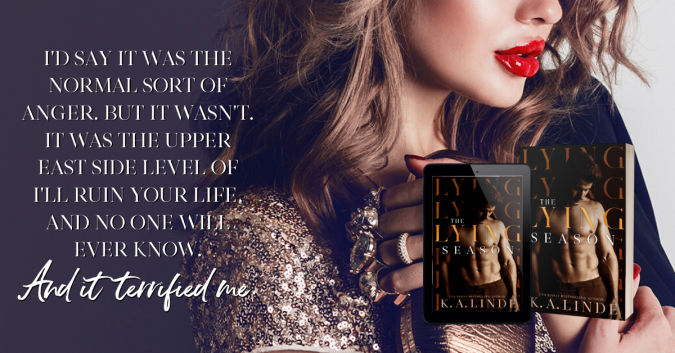 I’m torn on this one because I really liked the storyline but my first issue is I feel like there is way too much missing. I thought this was a standalone, but there was so many references to the past it was hard to follow at times. There were also too many characters if that is possible. I was actually putting down my kindle and taking a break because I was exerting too much energy figuring out who was who multiple times.

Lark works for the Mayor and is heavily involved in the political world. There was a lot about politics which I didn’t like and so many references to her being from the “upper east side” and her upper east side crew. Again I felt like there was huge chunks missing. An ex of hers, Sam, shows up at her job and she is devastated to see him. He is shocked to see her as well. It’s clear that something huge happened between these two and they try to steer clear of each other but you can tell they are still attracted to each other. The characters were moody and indecisive as well which left me questioning what the hell was going on.

I wanted to like this story so much! For me it was too political. Too much stereotyping of “upper east side” people that I still don’t get. I thought this story was a standalone, but as a reader I spent half the time trying to make a flow chart of who the characters are, trying to figure out what the backstory is and how it relates to THIS story. It was super frustrating. Clearly read all the books that come before this one that involve these characters. If you have ever been in a group of people where they are all talking about private/inside jokes and you felt clueless…that is how I felt reading this book.

K.A. Linde is the USA Today bestselling author of the Avoiding Series, Wrights, and more than thirty other novels. She has a Master’s degree in political science from the University of Georgia, was the head campaign worker for the 2012 presidential campaign at the University of North Carolina at Chapel Hill, and served as the head coach of the Duke University dance team. She loves reading fantasy novels, binge-watching Supernatural, traveling, and dancing in her spare time.

She currently lives in Lubbock, Texas, with her husband and two super-adorable puppies.

Join her newsletter for exclusive content, free books, and giveaways every month.