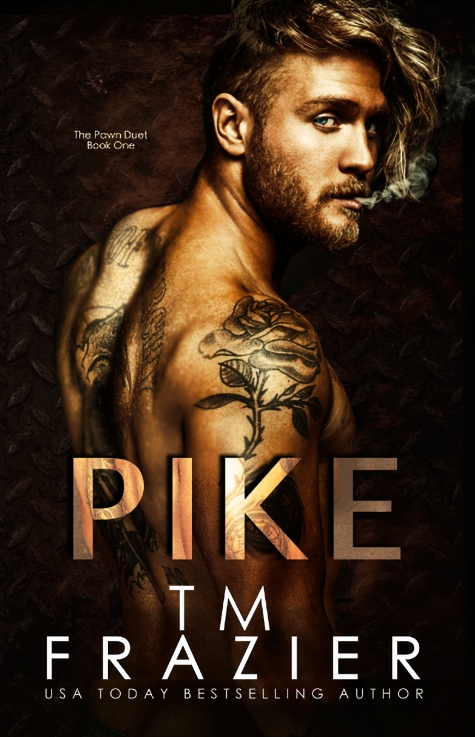 I was raised by the violent laws of the streets, spilling blood without the hindrance of useless emotions or connections.
Unfeeling. Unloved. Alone.

My life was perfect.

While on a manhunt for a mysterious enemy, one hellbent on taking both my business and my life, I find Mickey. She’s covered in mud, rambling nonsense, and clearly out of her mind.

That is until I discover a connection between the girl and my enemy.
Mickey isn’t a distraction anymore.
She’s the perfect weapon.
One I’ll use to exact my revenge.

The plan is an easy one, but there’s something about Mickey that’s making it more and more difficult.
A familiarity I can’t place. A need I can’t explain.
A want I have to deny.

After all, she’s not mine to keep. She’s a tool. My pawn.
My sacrifice.

This book was everything I wanted for Pike. But talk about a slow burn! Mickey and Pike have that undeniable attraction but there’s a little something keeping them from acting on it. All I wanted was to push the two together and watch the sparks fly. The beginning of this duet definitely had mystery, suspense, twists and feisty flirtation coming off the pages. Killing me softly with all the words. Can’t wait to see what happens next. 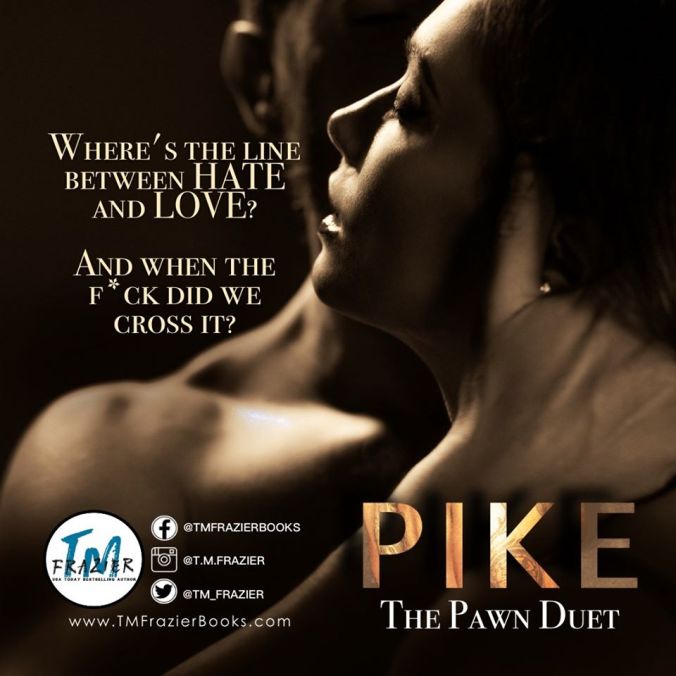 I raise the gun in both hands, aiming it at his chest. “I have to go. You can’t stop me,” I say, with all the resolve I have left. “You’re going to trade me and ambush them, but don’t you think they have the same plans for you? I have to go, and that way, fewer people will die. YOU won’t die. So, just let me leave. I have a plan. It will work. I’ll take them down for both of us.”

“No.” Pike looks from me to the gun. “And as I’ve told you before, you’re not going anywhere.” His words are dark and menacing. An amused smile turns up the corners of his lips.

I straighten my shoulders. “What’s so funny?” I ask, swallowing down the rising fear in my throat. I remind myself of one important fact to keep from choking on that fear.

I’m the one holding the gun.

Instead of freezing or retreating as one would do in this situation, Pike takes a bold step forward, catching me off guard. I stagger backward, but I’m not fast enough. He reaches out, and at first, I think he’s going for the weapon, but he doesn’t. He confuses me as he wraps his hands around mine, tightening my grip around the gun. He lifts my hands and bends slightly at the waist, forcefully pressing the barrel against his forehead. “You wanna shoot me, Mic? Then, fucking shoot me,” he dares, with wild blood shoot eyes.

My mouth drops open, but words don’t come out. I expected Pike to defend himself. To come at me. To step aside and let me leave, even though it was the least possible of all the outcomes. I didn’t plan for this.

“Not what you were expecting?” His tone is both mocking and rage-filled. “I know what that pretty brain of yours is thinking. You want me to attack you and make pulling the trigger easier on that conscious of yours.” He bites out a laugh. “Not gonna happen. If you want to do this, I’m not going to stand in your way, but you’re not fucking leaving either. So, come on. Shoot me. Go ahead. Do what you planned to do.” His eyes narrow with determination. My hands shake in his. “Pull the fucking trigger!”

The air around us is thick and charged. My skin breaks out in a sheen of sweat. My adrenaline spikes and I feel all too alert. Too aware of what’s taking place between us.

I grip the gun tighter and gaze into his dark eyes, his pupils are large and covering every hint of color within them. Behind the anger and determination, there’s something else that I didn’t expect. Something that I’m all too familiar with. Hurt. Pain that mirrors my own. Desperation that calls out to me like a piece of my soul trapped within Pike.

“Shoot me!” he cries, his face red with anger, teeth bared like a wild animal. “Fucking shoot me!”

With those words, my fiery resolve dissolves into ash.

I step back, needing to put some distance between us, but Pike doesn’t have the same thought. He follows me backward, keeping his grip tight on my hands and the gun between them.

“I…I can’t do this,” I whisper, releasing my grip on the gun.

Pike releases his hold on me, catching the gun before it can fall to the floor.

I look to the window, but it’s too high, and Pike is directly in front of the only door. There’s no escape. So much for being brave. Instead, I’ve signed my own death warrant. My heart races erratically with the realization that this is it. It’s over.

“This was a really stupid fucking move for someone who claims to be so smart, ” Pike sneers. He raises the gun.

I pinch my eyes shut, waiting for the feel the bullet of his wrath to pierce my skin. I hear a thud, and my eyes fly open and land on the carpet where Pike’s tossed the gun to the floor.

My eyes meet his in silent question. Why?

He answers by charging, a one-man stampede I can’t avoid as he barrels toward me. His chest crashes against mine, and my head connects with the wall with a thud that rattles my bones. I’m dizzy as fear lands in my gut like a ball of fire. My pulse races as his closeness consumes me. The smell of cologne and cigarettes lingers between us—a trace of whiskey on his breath.

“You’re going to regret not pulling that trigger,” he sneers. The darkness in Pike’s eyes tells me that, gun or no gun, I’m not getting out of this unpunished.

Or possibly even alive.

He cages me in with his hands against the wall beside me, engulfing me in the heat and rage radiating from his hard body. I feel his heart beating fast beneath his chest now pressed against mine. “What to do with you now?” Pike muses, his breath ragged. His voice full of promise and warning. He brushes his lips over my temple. I tremble at the contact. “You’re going to pay for that little stunt, Mic.”

He’s close. Too close. I’m entirely rigid, frozen in place. This wasn’t supposed to happen. How did I let this happen? I’m the most terrified I’ve ever been, and yet there’s something else I can’t understand. Something else between us that’s charging the air, causing me to shake, and it’s not just from fear. Hatred mixed with need. The yearning I’ve denied for him is no longer lying dormant. It’s as real as the ache growing in my stomach, the wetness between my thighs. If I thought the room felt charged before, it’s damn near on fire now. The flames of desire and hate lick at the walls around us, setting everything ablaze, making the small room feel smaller, closing in around us.

My nipples harden as they brush against his chest. I suck in a gasp.

He doesn’t miss my reaction. He looks to where my nipples are straining against my shirt with heated eyes.

The only sound in the room is our mutual heavy breathing as he slowly pulls his gaze from my chest. His eyes lock on mine. For a few seconds, we just stare at each other—foreheads lined with confusion and anger.

My mind, on the other hand, is anything but silent.

“Should I kill you or fuck you?” he muses. And I’m honestly not sure what scares me more. His anger or his desire. He brushes the backs of his knuckles against my jaw. “Maybe, both.”

“What do you—” I don’t have time to finish my question because his lips are on mine. He hoists me in the air, and my legs wrap around his waist on instinct.

It’s an angry joining of clacking teeth and biting lips. A war we are still fighting both with each other and ourselves. He growls at me when I pierce his lip, drawing blood. He licks the blood with his tongue then kisses me again, this time harder. A punishing kiss that has me growling at him in return. His coppery blood on my tongue tastes like victory. He licks his way between my lips, pushing his tongue into my mouth, licking and devouring with rough determined strokes. With a jerk of his hips, he presses the massive erection beneath his jeans between my legs, the pleasure that courses through me has me momentary seeing stars. I grind down on him in return.

He hisses in response, baring his teeth against my lips. “You’re going to pay for that, Mic,” he warns, taking my mouth in another kiss that has us grunting and growling at one another like starved animals fighting over the last scrap of food. But neither of us is about to give up. He pushes me back onto the bed, falling with me over my body, my legs splayed on both sides of his hips as he presses his cock again between my legs. I arch my back, needing to feel more. Needing for there to be nothing between us but desire. For each other, and to win. But, this is no longer a game we’re playing. It’s a battle. A war neither of us can win.

But, one in which we will both go down fighting.

T.M. (Tracey Marie) Frazier never dreamed that a single person would ever read a word she wrote when she published her first book. Now, she is a five-time USA Today bestselling author and her books have been translated into numerous languages and published all around the world.

T.M. enjoys writing what she calls ‘sexy wrong side of the tracks romance’ with morally corrupt anti-heroes and ballsy heroines.

Her books have been described as raw, dark and gritty. Basically, what that means, is while some authors are great at describing a flower as it blooms, T.M. is better at describing it in the final stages of decay.

She loves meeting her readers, but if you see her at an event please don’t pinch her because she’s not ready to wake up from this amazing dream.