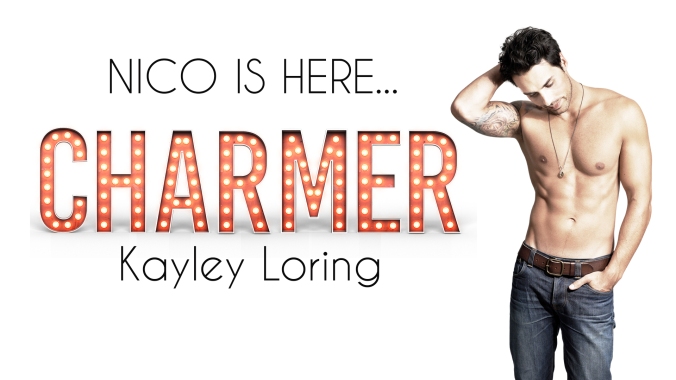 Charmer by Kayley Loring is LIVE!!  You will be enchanted by this steamy romantic comedy about Nico, a dreamy singer-songwriter who falls hard for a single mom and her young son! #OneClick today! 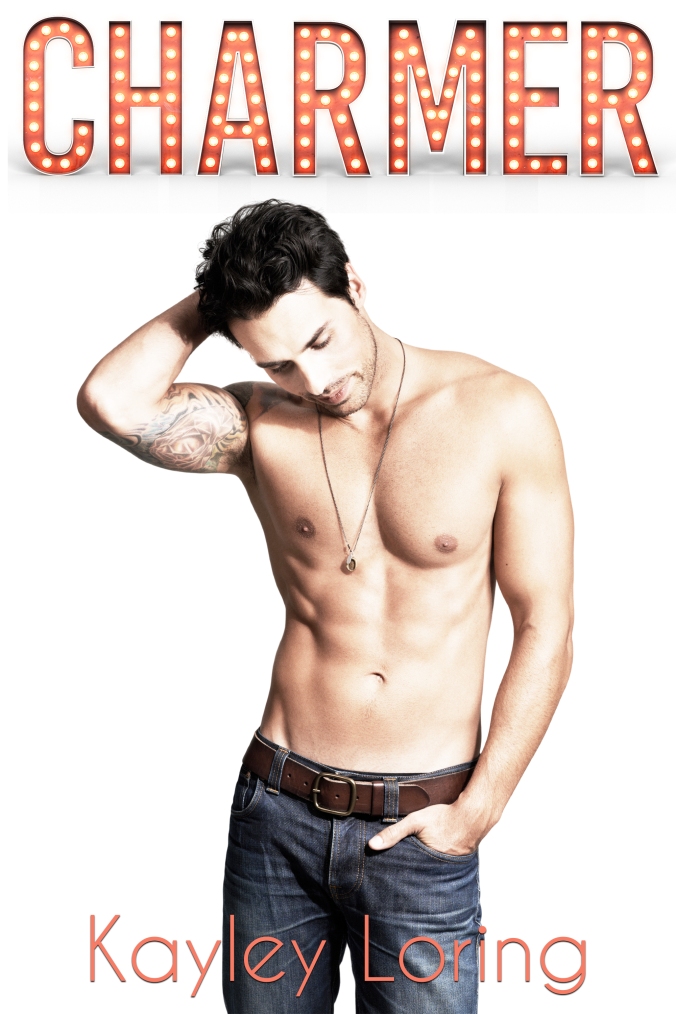 She serves me coffee late at night when I come around to write lyrics,
but it’s not the caffeine I’ve gotten addicted to.

We’ve got the spark, but she’s the only woman in town
who seems to be immune to my charms.

When it’s time for me to leave for my cross-country tour,
I just can’t imagine not seeing her for months.

So I offer her a job on the road with me.

Everyone in LA knows that Nico Todd has a way with songs and with the ladies.

What he doesn’t know is that I would love to let him have his way with me.

But my life can only revolve around one infuriatingly cute guy—
the six-year-old that I live with.

Imagine my surprise when Nico finds out about my little boy
and tells me to bring him and my mom on the road too.

And imagine Nico’s surprise when he realizes my son
is the biggest charmer of them all.

Charmer was a cute little love story book. Nico is a pretty famous musician. As a former child actor, finding women was never an issue for him. He finds himself obsessed with a waitress and constantly going in to see her. Only she doesn’t give him the time of day and that intrigues Nico even more.

Kat is a single mom and does not have time or interest in a relationship. Not only is she not interested but she knows Nico is famous and has no interest in reciprocating his infatuation. Even though she would love to since he’s hot, taking care of her son is her first priority so she ignores him.

Until he offers her a job working for him. He wants her to document his tour he is going on and offers her the job and for her son Tate, his caregiver and Kat’s mother Lou to accompany her.

It was cute to watch these two try to keep it professional and heartwarming to see how attached Nico gets to Tate. There are couple of characters who added comedy to this story and had me laughing out loud a few times. This was a feel good love story and a solid book….definitely worth the read!

I may have studied to be on the wrong side of the camera, because I am the Meryl Streep of acting like I don’t want to lock myself in a closet with Nico Todd and lick him all over.

I can feel his beautiful brown eyes on me as I walk away, but I’m not going to look back at him. If I look back at him, he’ll think I’m flirting. And I’m not flirting. I’m just a really awesome waitress who obsesses about the well-being and voice and eyelashes and butt and hands and full lips of all my customers. I check in with my other table to see if these non-Nico people want anything else, and quickly glance over my shoulder at him.

He’s scribbling in his notebook. Not looking at me. Good. Why should he?

But praise the Disney gods, he grew up good. I wasn’t a huge fan of that wizard show—always more of a movie nerd—but I watched the first season if I was at home when it was on. I was thirteen and my friends had pictures of Shane Miller and Nico Todd up in their lockers. I may have had Annie Leibovitz portraits and stills from Ken Burns documentaries taped to mine, but I had eyes and hormones. Still do!

I didn’t recognize him immediately the first time I saw him walk into the coffee shop, but my stomach flipped in a way that it hadn’t in years. We get all kinds of celebrities in here pretty much every night, because Beachwood is that kind of neighborhood. It’s a casual hipster restaurant, so most people roll in here wearing T-shirts and jeans, unless they’re talent agency doucheholes. But some people look better in T-shirts and jeans than others. Some people have that glow about them, even in a dimly lit retro coffee shop. And all the other waitresses who were on that shift were talking about Nico in the back of the house. It seemed like every one of them knew someone or had heard about someone who’d been out with him—once or twice. I’ve been somewhat out of the loop for about six years, so that was the first I’d heard of him becoming a musician, and that was when I knew for certain that he’d be off-limits for me.

But I mean, it’s my job to take good care of him while he’s here. And to occasionally wonder what the fuck he’s up to when he isn’t here. And to think about him every time I take a shower.

Because once I had listened to him on Spotify, I became a fan.

I fell in love with the songs and tried to stay detached from the singer.

Which is impossible, because he’s so good. His voice is sexy, sure, but he has this way of singing with his whole heart and soul even though he isn’t usually belting things out. And he’s got magic fingers because the way he plays guitar—I swear it feels like he’s strumming my clitoris. His songs are cool but warm at the same time, like an ice cream sundae. They’re all about women, of course, and it’s so easy to close your eyes and picture him singing to you. Even the songs that are about things not working out with a girl are somehow poignant and swoony.

But by the tenth time I’d listened to every song on all of his albums, I realized something: even though he writes and sings love songs—he never once says the words “I love you.”

Which is why he’d be nothing but trouble.

But I can still appreciate his talent when I’m alone, in the privacy of my bedroom.

I can still have a crush on him.

Everyone needs a little crush to get through the day.

Before writing steamy romantic comedy novels, Kayley Loring got a BFA in creative writing from a Canadian university and had a fifteen-year career as a screenwriter in Los Angeles (under a different name). She mostly wrote PG-13 family comedies that studios would pay her lots of money for and then never make into movies. In 2017 she decided to move to the Pacific Northwest and write about all the fun stuff that she wasn’t allowed to write about in those PG-13 scripts. Now she’s breathing cleaner air and writing dirtier words. It’s an adjustment she’s happily getting used to.