If you find yourself having banged your new boss—the principal—in the back of your Jeep one drunken night, here’s a few takeaways based on my experience…

Lesson One: Always get her FULL name.

Lesson Two: Consider asking what she does for a living.

Lesson Three: Find out why she’s moved to town. Get details. Details are crucial.

Lesson Four: Don’t alter her bio in front of an auditorium of high school students unless you know she has a sense of humor for that sort of thing.

Lesson Five: If you ignore Lesson Four, apologize instead of flirt when you’re sent to the principal’s office.

Lesson Seven: Pay attention to this one—it’s the most important of them all.

Don’t fall for your one-night stand.

What a cute freaking book!! This is your old age tale of having a one-night stand that you think you will never see again and BAM!!! There they are. They are thrust so far in your life that you can’t escape them. While this story can get written to death, this book was not the case. It was super cute and I loved Holly and Austin.

After a one-night stand these two find their lives intertwined in one funny incident after another. The dynamic between these two is palpable as well as their chemistry. I don’t want to give too much away but let’s just say that one wants to get away from this town and the other has recently just moved to it.

Austin has a huge family and I can only pray to the literary gods that some of them get their own books. There are so many and I loved each of them more then the next. They added so much to this crazy little story.

This book had a bit of it all – love, heartbreak, sadness…you name it, it had it and it was really written well and a definite page turner. There are so many other little side stories but they all intertwine perfectly! Looking forward to reading more about this crazy bunch!!! 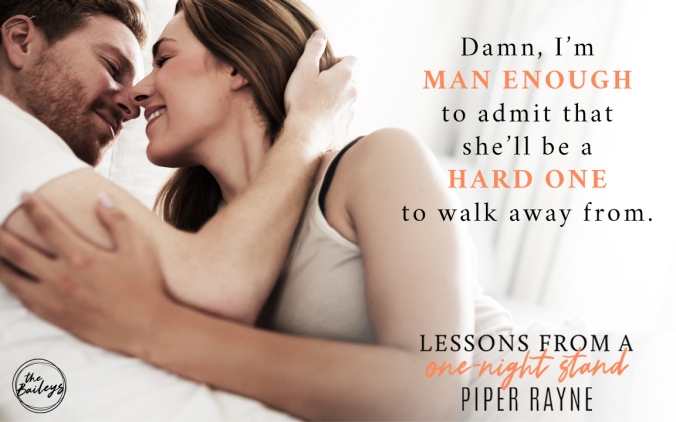 “We need you to introduce Principal Radcliffe.” She peers behind me then pushes up on her tiptoes to whisper in my ear, “Malcolm, I mean Vice Principal Ealey, called in this morning. I think he was still…”

Fay doesn’t have to finish the sentence. Malcolm Ealey went through a public divorce last year and has been spending a lot of his time at the Lucky Tavern, drowning in a helluva lot more than his sorrows. That’s why, even though he should have become our temporary principal, the school board decided to hire someone new.

She hands me a piece of paper. “The kids look up to you, and everyone thinks that the kids will welcome Principal Radcliffe if you introduce her.”

Her. Another woman. Hopefully this one is well-caffeinated and not pregnant. We’ll all stand a better chance that way.

I accept the piece of paper, looking over what I need to say. “Fine.”

I’m not scared of public speaking. I’ve got two teenage girls at home. You don’t know a hostile environment until you’re trying to break up a fight between those two.

“You’re the best, Austin.” Fay squeezes my forearm then walks down the hall.

My footsteps slow as I read over the new principal’s bio. What the hell is a Yale graduate doing in Alaska at Lake Starlight High School? After skimming over her education, I fold up the paper. I can wing it from there. Besides the kids couldn’t care less about what’s printed on that sheet.

Heading into the auditorium, I search out the face of our new principal, but I know everyone here.

“Her meeting with the superintendent is running a tad late, so if you could stall, I’ll tap you on the shoulder when it’s safe to announce her,” Fay informs me.

I will not miss this part of my job next year.

Before I realize it, I’m in front of the podium, clearing my throat and introducing myself, as if everyone here doesn’t already know who I am. Sedona rolls her eyes and looks away. I have no fucking clue why she’s so embarrassed of me. I mean, look at me. Six foot two, two-ten, short, neat haircut. I work out four times a week, hike, bike, ski. My muscles aren’t from just the gym…

Okay, before I keep sounding like a male-seeking-female want ad, let’s get on with how my day went into the shitter in a matter of twenty minutes.

I tell a few jokes, and the kids loosen up a bit. Maybe I should rethink the whole college baseball coach thing and go for stand-up comedy. I’m pretty good at this.

Fay taps my shoulder, and thank God, because I’m running out of material.

I pull the paper out of my back pocket and clear my throat one more time. “All right, everyone. We all know that Principal Miller has left us to enjoy her new baby, so we’re welcoming a new principal into our school. Our new principal for the remainder of the year is Dr. Radcliffe. She graduated from Yale with her doctorate in education. She comes here from the lower forty-eight, so make sure you give a big Alaskan welcome!”

About half the kids in the auditorium clap while the rest of them stare at the stage with an expression that only a bunch of unimpressed and uninterested teenagers can manage.

Time to grab their interest and get them to buy in. “Principal Radcliffe’s hobbies include streaking during football games, ferret racing, and taking surveys for money.”

The kids roar with laughter, finally looking as if they’re interested and want to be here. Fay steps up and nudges me.

“Sorry,” I mumble. “We’ll bring Dr. Radcliffe out to explain her hobbies in more depth.” I turn from the podium at the sound of heels clicking across the stage.

This is the part where my mouth drops open and my testicles jerk up, seeking protection.

See the auburn-haired woman walking right toward me? The one who looks as pissed off as Sedona did when I honked my horn in the parking lot this morning?

I don’t believe in kissing and telling, but I’ll tell you—this is the first and only principal I’ve ever given an orgasm to in the backseat of my Jeep.

Piper Rayne, or Piper and Rayne, whichever you prefer because we’re not one author, we’re two. Yep, you get two USA Today Bestselling authors for the price of one. Our goal is to bring you romance stories that have “Heartwarming Humor With a Side of Sizzle” (okay…you caught us, that’s our tagline). A little about us… We both have kindle’s full of one-clickable books. We’re both married to husbands who drive us to drink. We’re both chauffeurs to our kids. Most of all, we love hot heroes and quirky heroines that make us laugh, and we hope you do, too.

Join our newsletter and get 2 FREE BOOKS!

Be one of our unicorns